Dolita was born in Normandie and grew up in Paris. At 16 she was discovered by the Designer of the House of Haute Couture of Jacques Esterel.

After eighteen months she decided to draw lingerie and swimwear line. She worked for both for fine lingerie designers and commercial labels, proving her ability and creativity.

Only years later, she created DOLITA Paris, her own line that seduced the Parisian Fashion world, was interviewed on television and featured in magazines, Elle, Glamour, Vogue, Cosmopolitan, The New York Times & much more, in less than a month.

boutiques. Driven by her passion and creativity, she sewed thousands of dresses and in a few months has expanded sales into the international Department stores in United Kingdom, Spain, Singapore, the United States, Israel, Japan, and Dubai.

DOLITA Paris collection has been sold in high-end stores including, Harrods, Bergdorf and Goodman, Barneys New York, Takashimaya and at the Dolita Boutiques and Dolita Pop Up Store in New York.

Inspired by the energy of the City, in 2009 Dolita sewed 52 white-dresses in three days, hired 26 models and organized her own Fashion show around Bryant Park during the New York Fashion Week, her White dresses caught the attention of the superstar Beyonce, who wore it for a photoshoot that appeared in Los Angeles Confidential magazine.

Dolita is passionately devoted to her craft and handmade all her designs, using no patterns or measurements, she has the ability to create the perfect dresses for each of her clients just by looking at them, her fashion is designed to fit women of all ages, body shapes and sizes, her Parisian style distinguishes itself from the feminity and elegance. It is chic and timeless. 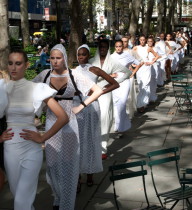 "I choose harmony over perfection and  for me, happy clients are always right "

Each and every DOLITA Paris piece is hand designed and completely handmade by Dolita in New York, Dolita has a wondrous ability to create and make all her designs, using no patterns or measurements. Dolita is passionately devoted to her craft, she is creative, Fast and spontaneous, and believes in "harmony and in the sense of proportion" she cuts the fabric directly, then assembles the pieces like a patchwork, using her own technique she has sewn thousands of dresses.

For All Generations & Body shapes !